My friend and colleague Alejandro Rodriguez, director of the Department of Economics at CEMA in Buenos Aires, wrote me a few emails that Argentina seems to be blowing up again in very interesting and sad ways. I haven't seen any coverage in the US media.


Argentina is going through some fun times (for macroeconomists)... After a two day holiday markets opened yesterday and the peso kept falling (-3%) despite the rate hike (300bps) on friday and the continued drain of reserves. We are trapped with Bill Murray in Groundhog Day. Same thing today... markets open with pressure on the peso. The central bank sold 300 millon of reserves in less than 10 minutes early in the morning when liquidity is at its lowest and it couldn´t sopt the run. Soon after it announced another rate hike of 300bps. Short term debt that expires on may 16 has a yield of 38.7% APR and there are 680 billon pesos of it waiting to mature in less than two weeks. Still the market did not respond and the peso kept falling, more than 8% with respect to yesterday´s close....

Naturally my interest is particularly peaked by a country whose central bank seems powerless to stop inflation and devaluation in a time of fiscal stress. In fact, there are indications that raising interest rates, by making interest costs larger, make the fiscal problem worse and make devaluation worse, not better.

I asked Alejandro for a bit more to share with blog readers since we hear so little about this in the US. Here is his longer story backward: 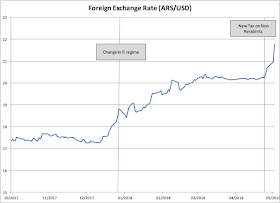 Groundhog Day: ...Like Phil Connors (Bill Murray) we got trapped in Punxsutawney by the perfect storm. Last year Congress passed a law changing the tax code which included a new tax on Central Bank debt held by non residents. The new tax became effective on April 25th. The new tax initiated a sell off by non residents which was absorbed by the CB which sold USD 2.1 billon between April 23rd and 25th without the dollar moving one cent (20.25 ARS/USD). The new tax coincided with the increase of the 10 year US treasuries yield and the strengthening of the dollar. The CB thought this was an external shock and that no further actions were going to be needed.
They were wrong. Pressure on the dollar continued on Thursday 26th. The CB sold USD 850 million but eventually had to let it go and the peso fell 1% despite their best efforts. Friday was the same thing all over again. Like Phil Connors, the CB started selling reserves as the previous days. But no matter what was offered nothing seemed to be enough so they decided to increase rates by 300 bps. The peso fell another 3% and USD 1.4 billion of reserves sold.

May started a little late in Argentina as markets were closed on Monday and Tuesday because of a National holiday but Wednesday 2nd was Groundhog Day all over again. Thursday 3rd was not any different. The peso started falling early on and the CB stepped in with an offer to sell USD 300 million which were sucked by the market like empty space. Immediately the CB raised rates by another 300 bps hoping to end the run with no luck. Without the CB in the market, bid/ask spreads rose and the market had trouble finding an equilibrium price, a last minute operation increased the closing price from 22.40 ARS/USD to 23.00 ARS/USD. Short term letters issued by the CB that mature in 13 days yielded 40% APR. Reserves fell to USD 56.1 billon from USD 62.6 billon in March.

Early in the morning before markets opened the Government made a coordinated series of announcements:


The Central Bank announced another rate hike of 675 bps bringing seven day REPO rates to 33% (passive) and 47% (active). One day REPO rates rose to 28% (passive) and 57% (active). It also announced that it lowered the upper limit on foreign assets that banks can hold (forcing them to sell dollars or limiting their future demand) and that it would continue operating on the foreign exchange (spot and futures) if needed.

The Secretary of the Treasury (Ministro de Hacienda) announced that it lowered the primary fiscal deficit target for 2018 from 3.2% of GDP to 2.7% of GDP. Spending cuts on public investment were announced.

The peso appreciated and the exchange rate decreased from 23.00 ARS/USD to 21.75 ARS/USD.


Yesterday the peso kept falling and same thing today. FX is at a record high of $23.10 ARS/USD (5.5% up since yesterday). Central Bank absent from fx markets. President Macri will address the Nation in 15 minutes. CB short term debt yields

Well so much for high interest rates raising the exchange rate.

How did Argentina get to this place? Alejandro provided a lot of background which is useful to understanding this latest event. 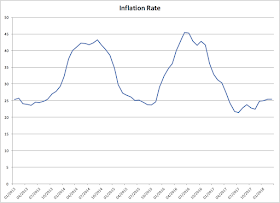 ...2015. The peso was appreciated in real terms and kept in place with capital controls, twin deficits were financed with money printing and loss of international reserves. The economy had been stagnant since 2011, inflation averaged 25% and markets were distorted everywhere.

But then there was light at the end of tunnel, Mauricio Macri with a center left to center right coalition won the presidential elections.

Macri and his team faced very difficult challenges. They successfully lifted capital controls; gained back access to international capital markets that were closed to Argentina due to the legal battle in NY over the 2001 default and started to bring relative prices back to order (some utilities were held constant in pesos at the same level they were in the 90´s).

The initial shock on the exchange rate (the peso depreciated by one third with respect to the dollar) and the increase in utilities put pressure on the CPI inflation which Macri had promised to control. The Central Bank (CB) increased rates to 38% trying to control inflation expectations and the dollar exchange rate. Like the previous government, they kept using very short term nominal debt issued by the CB to try to control the money supply (the ratio of debt to monetary base in November 2015 was 0.74).

The first year was bad as expected, but people were optimistic. GDP fell 1.8%, inflation reached 40%, and debt started to accumulate at a rate of 5% of GDP per year give or take. The initial forecasts made by the government placed inflation around 25% (same as the previous year) and growth around 2.5% (fueled by FDI which never came).

The fiscal deficit remained high and was financed foreign debt. This resulted in a huge capital inflow which was absorbed by the CB accumulating reserves and sterilizing the equivalent amount of pesos issuing more short term nominal debt.

In 2017 the CB officially announced that it started implementing an Inflation Targeting (IT) regime. The goal for the year was 12%-17% inflation, 8%-12% in 2018 and 5% in 2019. The treasury also announced a primary fiscal deficit target for the following years: 4.2% of GDP in 2017 and 3.2% of GDP in 2018 (these figures do not include interest payments of over 2% of GDP and deficit incurred by the provinces and municipalities).

Soon after the implementation of IT the CB faced it first real test. As the midterm elections approached, and former president Cristina Fernandez de Kirchner was perceived as a real threat, the peso started falling. This coincided with higher inflation numbers than expected which drifted away from the 17% upper bound. The CB responded by raising rates slightly and eventually selling reserves. People though the CB won the round and Cambiemos (Macri´s ruling coalition) won the midterm elections.

With renewed confidence and little time to go the CB decided to bring down inflation in line with the target as market expectations drifted even further. Some economists noted that even all the efforts done by the CB inflation was still at the pre Macri times (around 25%) and that the inflation dynamics were no different than the one observed after the January 2014 devaluation of the peso, with monetary aggregates growing at 30% per year on average, just like before, and a ratio of CB nominal debt to monetary base of 1.4 (double the amount from 2015).

Then came December 2017. Inflation reached 3.2% that month (although the final number was not known at the time, high frequency and other private estimates were showing that inflation was rising rapidly) for a final number of 25% over the year. This represented a 10% deviation from the center of the IT goal. The government got scared that the high rates would hurt economic activity in the future (GDP grew 2.9% in 2017) and that they were not enough to bring inflation down to the target so they decided to change the target for 2018 and 2019. The new targets were 15% and 10% respectively.

The announcement was done on December 28th, the equivalent of April´s Fool in the US, in a joint conference held by the President´s Chief of Staff, the Secretary of the Treasury, the Secretary of Finance and, a grumpy faced, President of the CB. Many viewed the change in the target and the way it was announced as a lack of independence of the CB, especially since the monetary authority had publicly stated that “changing the target was like having no target”.

The peso had started to fall before the change in the IT regime (anticipated shock or inside trading?) but the rally on the dollar kept going as the CB lowered rates and peso denominated assets became less attractive to investors. To make matters worse, inflation expectations kept raising as the credibility of the IT regime plummeted and the inflation numbers for January and February turned out to be higher than expected. The CB responded with announcements stating that the increase inflation was temporary due in part to the recent jump in the value of the dollar and that they were ready to raise rates if inflation did not decrease. The CB also started selling reserve in early March to calm down the dollar. Interventions were relatively small, between USD 30 million and USD 400 million in a market that operates an average daily volume of USD 600-800 million, and they continued until early April when things appeared to calm down.

Older history. Argentina in the 1990s is a lovely (sad) test case, as even 100% backing of the currency is not enough to peg an exchange rate, because the government does not back the debt. If it could back the debt, it wouldn't have to borrow! So even a currency board is not immune from the inflationary effects of fiscal problems. 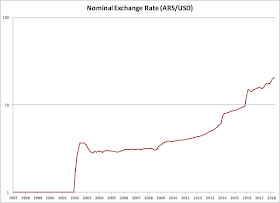 In the early 90, after two hyperinflations, Argentina adopted the Convertibility, i.e. a fixed the exchange rate (1 ARS/USD). The experiment lasted ten year until a global strengthening of the dollar coupled with other external shocks (and homemade mistakes) spooked away the capital inflows that were needed the finance Argentina´s fiscal deficit and ballooning debt.

In December 2001 President de la Rua resigned, debt was defaulted and the economy collapsed even further. The Convertibility ended and the peso started to float (with interventions) after an abrupt devaluation (after a short overshooting the dollar stabilized around (3 ARS/USD). The depreciated real exchange and booming commodity prices acted like an adrenaline boost on the real economy which started to grow.