Jason Crawford's "Roots of Progress" blog on what happened to nuclear power is an important read for many reasons, among them economic growth, climate, and regulation. It's a review of Why Nuclear Power Has Been a Flop by Jack Devanney which goes on my must-read list.

Perhaps the important economic question of our time is this: Is growth over? Are we running out of ideas? Or is our decades-long growth slowdown the result of an increasingly sclerotic, over-regulated, crony-capitalist rent-seeking political system? Nuclear power offers an interesting case study.

Through the 1950s and ‘60s, costs were declining rapidly. A law of economics says that costs in an industry tend to follow a power law as a function of production volume: that is, every time production doubles, costs fall by a constant percent (typically 10 to 25%). This function is called the experience curve or the learning curve. Nuclear followed the learning curve up until about 1970, when it inverted and costs started rising: 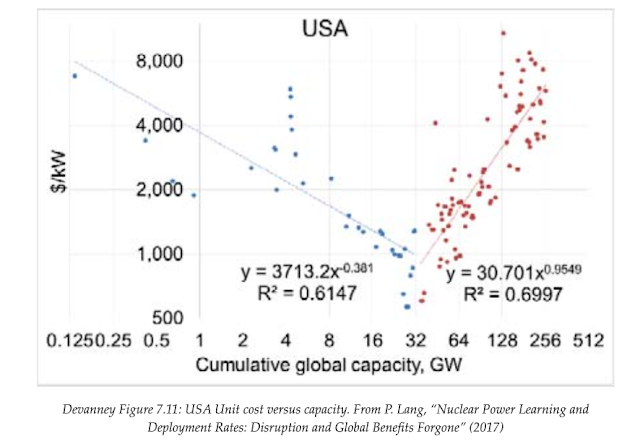 Plotted over time, with a linear y-axis, [note mulitplicative scale in the last graph] the effect is even more dramatic. Devanney calls it the “plume,” as US nuclear constructions costs skyrocketed upwards 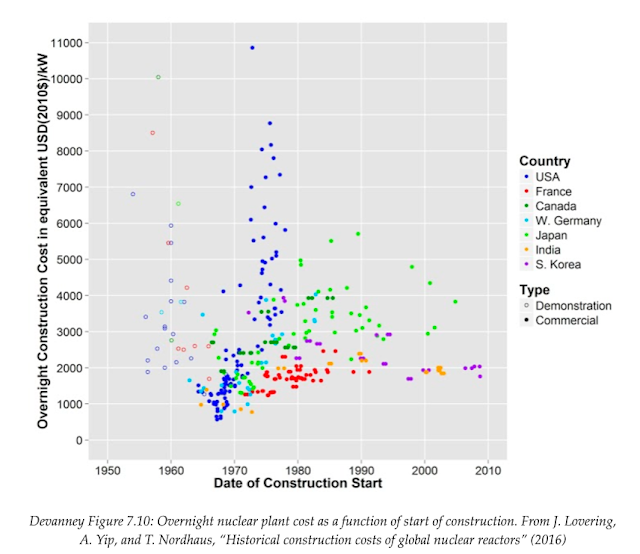 Read carefully. US construction costs exploded in the 1970s. South Korean construction costs did not. The blue points do not continue because the US simply stopped building nuclear power plants, not because we solved the cost disease.

This chart also shows that South Korea and India were still building cheaply into the 2000s. Elsewhere in the text, Devanney mentions that Korea, as late as 2013, was able to build for about $2.50/W.

The standard story about nuclear costs is that radiation is dangerous, and therefore safety is expensive. The book argues that this is wrong: nuclear can be made safe and cheap. It should be 3 c/kWh—cheaper than coal.

The post goes on about the safety issue, which you should read but I won't summarize.

The point for us: Here is a clear case of an end of growth. We know the cause. We did not run out of ideas. Regulation killed this industry.

Excessive concern about low levels of radiation led to a regulatory standard known as ALARA: As Low As Reasonably Achievable. What defines “reasonable”? It is an ever-tightening standard. As long as the costs of nuclear plant construction and operation are in the ballpark of other modes of power, then they are reasonable.

This might seem like a sensible approach, until you realize that it eliminates, by definition, any chance for nuclear power to be cheaper than its competition. Nuclear can‘t even innovate its way out of this predicament: under ALARA, any technology, any operational improvement, anything that reduces costs, simply gives the regulator more room and more excuse to push for more stringent safety requirements, until the cost once again rises to make nuclear just a bit more expensive than everything else. Actually, it‘s worse than that: it essentially says that if nuclear becomes cheap, then the regulators have not done their job.

The new rules would be imposed on plants already under construction. A 1974 study by the General Accountability Office of the Sequoyah plant documented 23 changes “where a structure or component had to be torn out and rebuilt or added because of required changes." The Sequoyah plant began construction in 1968, with a scheduled completion date of 1973 at a cost of $300 million. It actually went into operation in 1981 and cost $1700 million. This was a typical experience.

Incentive 2, 3: CYA and pay for delay

The individuals who work at NRC are not anti-nuclear. They are strongly pro-nuclear—that‘s why they went to work for a nuclear agency in the first place. But they are captive to institutional logic and to their incentive structure.

The NRC does not have a mandate to increase nuclear power, nor any goals based on its growth. They get no credit for approving new plants. But they do own any problems. For the regulator, there‘s no upside, only downside. No wonder they delay.

Further, the NRC does not benefit when power plants come online. Their budget does not increase proportional to gigawatts generated. Instead, the nuclear companies themselves pay the NRC for the time they spend reviewing applications, at something close to $300 an hour. This creates a perverse incentive: the more overhead, the more delays, the more revenue for the agency.

There's much more here about how it went wrong.

How will it get fixed?

At the end of the day, though, what is needed is not a few reforms, but “metanoiete”: a deep repentance, a change to the industry‘s entire way of thinking. Devanney is not optimistic that this will happen in the US or any wealthy country; they‘re too comfortable and too able to fund fantasies of “100% renewables.”

This goes too easy. Not only the US, but now the alphabet soup of international agencies is trying to foist these fantasies on poor countries.

Instead, he thinks the best prospect for nuclear is a poor country with a strong need for cheap, clean power. (I assume that‘s why his company, ThorCon, is building its thorium-fueled molten salt reactor in Indonesia.)

The post starts with one obvious statement, but one that bears repeating: If we are going to de-carbonize the economy -- which means a vast increase in electricity -- and also allow people around the globe to escape poverty, only nuclear power can do it. 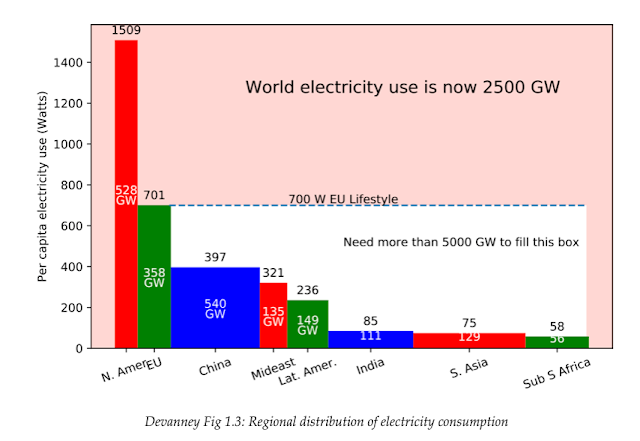 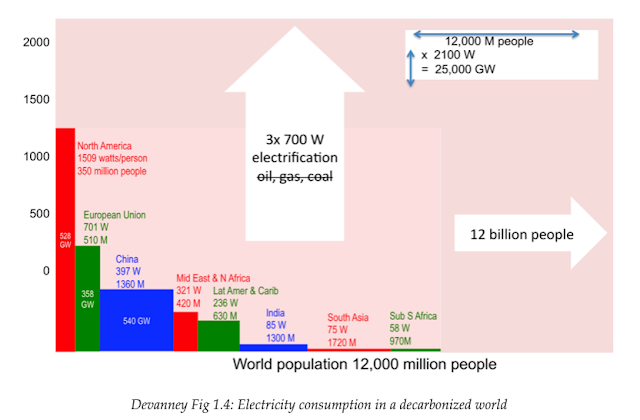 I wonder as each anniversary comes up how we should remember the costs and benefits of Hiroshima and Nagasaki. This is usually presented as the horror of what the bombs did to civilian Japanese, vs. saving the larger horror of a long war, incendiary raids by fleets of B29s, and innovation of the home islands.

But let us indulge in a little counterfactual history. Had we not seen what nuclear bombs can do, it is likely our economy would enjoy widespread cheap nuclear power. There would be no global warming, climate change. And economic growth would have been a great deal larger, especially in poor countries. Of course, had we not seen the horror of two small nuclear bombs, the US and Soviet Union would quite likely have at some point used much larger bombs, a thousand-fold greater horror.

If you want to say obvious things about safety and proliferation, the possibilities of new designs, read the post or the book first.