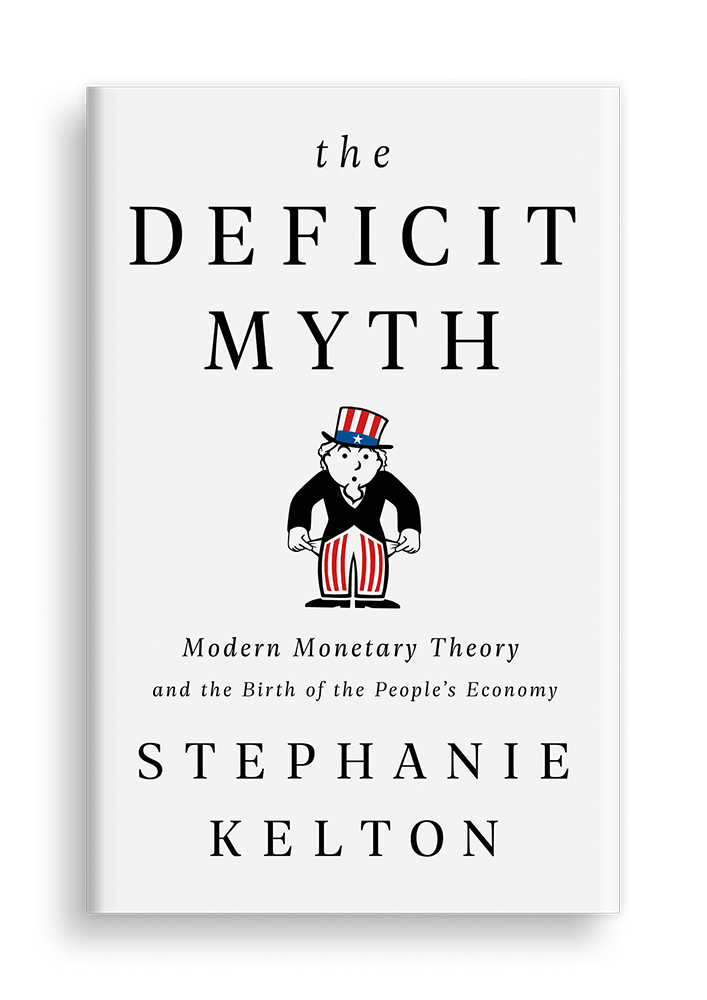 I read Stephanie Kelton's book, The Deficit Myth: Modern Monetary Theory and the Birth of the People’s Economy,” and wrote this review for the Wall Street Journal. Now that 30 days have passed I can post the whole thing.

I approached this task with an open mind. What I had heard of MMT has some overlap with fiscal theory of the price level, on which I work, and I hoped to see some commonality.

Modern monetary theory, known as MMT, erupted suddenly into the public consciousness when it won the attention of high-profile politicians including Bernie Sanders and Alexandria Ocasio-Cortez and their media admirers. Its central proposition states that the U.S. federal government can and should freely print money to finance a massive spending agenda, with no concern about debt and deficits.

What is MMT? Its advocates have told us in essays, blog posts, videos and tweets what MMT says about this and that, but what is its logic and evidence? As a monetary theorist who is also skeptical of conventional wisdom, I looked forward to a definitive exposition from Stephanie Kelton’s “The Deficit Myth: Modern Monetary Theory and the Birth of the People’s Economy.”

Ms. Kelton, a professor of economics at Stony Brook University and senior economic adviser to Bernie Sanders’s presidential campaign, starts with a few correct observations. But when the implications don’t lead to her desired conclusions, her logic, facts and language turn into pretzels.

True, the federal government can spend any amount by simply printing up the needed money (in reality, creating bank reserves). True, our government need never default since it can always print dollars to repay Treasury bonds. But if the government prints up and spends, say, $10 trillion, will that not lead to inflation? Ms. Kelton acknowledges the possibility: “If the government tries to spend too much in an economy that’s already running at full speed, inflation will accelerate.”

So how do we determine if the economy is running at full speed, or full of “slack,” with unemployed people and idle businesses that extra money might put to work without inflation? Ms. Kelton disdains the Federal Reserve’s noninflationary or “natural” unemployment rate measure of slack as a “doctrine that relies on human suffering to fight inflation.” Even the recent 3.5% unemployment is heartlessly too high for her.

“MMT urges us to think of slack more broadly.” OK, but how? She offers only one vaguely concrete suggestion: When evaluating spending bills, “careful analysis of the economy’s . . . slack would guide lawmakers. . . . If the CBO [Congressional Budget Office] and other independent analysts concluded it would risk pushing inflation above some desired inflation rate, then lawmakers could begin to assemble a venue of options to identify the most effective ways to mitigate that risk.” She doesn’t otherwise define slack or even offer a conceptual basis for its measurement. She just supposes that the CBO will somehow figure it out. She doesn't mention that the CBO now calculates a measure, potential GDP, which does not reveal perpetual slack. And she later excoriates the CBO for its deficit hawkishness.

Really her answer is: Don’t worry about it. She simply asserts that “there is always slack in the form of unemployed resources, including labor.”

We’re not talking about a little slack either. Ms. Kelton’s “people’s economy” starts with the full Green New Deal and moves on to a federal job for anyone, free health care, free child care, the immediate cancelation of student debt, free college, “affordable housing for all our people,” national high-speed rail, “expanded Social Security,” “a more robust public retirement system,” “middle-class tax cuts,” and more. How much does this add up to? $20 trillion? $50 trillion? She offers no numbers. How is it vaguely plausible that the U.S. has this much productive capacity lying around going to waste?

In a book about money, the inflation of the 1970s and its defeat are astonishingly absent. History starts with Franklin Roosevelt—a hero for enacting the New Deal but a villain for paying for it with payroll taxes rather than fresh dollars. Ms. Kelton praises John F. Kennedy, too. He “pressured unions and private industry, urging them to keep wage and price increases to a minimum to avoid driving inflation higher. It worked. The economy grew, unemployment fell sharply and inflation remained below 1.5 percent for the first half of the decade.”

The second half of that decade—Lyndon Johnson’s Great Society and Vietnam War spending, inflation’s breakout, Richard Nixon’s [1971] disastrous price controls—is AWOL. Did we not try MMT once and see the inflation? Did not every committee of worthies always see slack in the economy? Did not the 1970s see stagflation, refuting Ms. Kelton’s assertion that inflation comes only when there is no “slack”? Don’t look for answers in “The Deficit Myth.”

Victory over inflation under Ronald Reagan and Margaret Thatcher goes likewise unmentioned. History starts up again when Ms. Kelton excoriates Thatcher for saying that government spending has to be paid for with taxes. She insinuates, outrageously, that Thatcher deliberately lied on this point in order to “discourage the British people from demanding more from their government.”

If spending can be financed by printing money, “why not eliminate taxes altogether?” Ms. Kelton begins consistently. She criticizes Sens. Bernie Sanders and Elizabeth Warren for claiming that they need to raise taxes to pay for spending programs. But then why raise taxes? Taxes exist to decapitate the wealthy, not to fund spending or transfers: “We should tax billionaires to rebalance the distribution of wealth and income and to protect the health of our democracy.”

She offers a second answer, more subtle, and revealingly wrong. She starts well: “Taxes are there to create a demand for government currency.” This is a deep truth, which goes back to Adam Smith. Soaking up extra money with fiscal surpluses [higher taxes or less spending] is, in fact, the ultimate control over inflation. But then arithmetic fails her. To avoid inflation, all the new money must eventually be soaked up in taxes. The new spending, then, is ultimately paid for with those taxes.

What about the debt? Ms. Kelton asserts the government can wipe it out. Again, she starts correctly: The Fed could purchase all of the debt in return for newly created reserves. She continues correctly: The Fed could stop paying interest on reserves. But in conventional thinking, these steps would result in a swift inflation that is equivalent to default. Ms. Kelton asserts instead that these steps “would tend to push prices lower, not higher.” She reasons that not paying interest would reduce bondholders’ income and hence their spending.

The mistake is easy to spot: People value government debt and reserves as an asset, in a portfolio. If the government stops paying interest, people try to dump the debt in favor of assets that pay a return and to buy goods and services, driving up prices.

What about all the countries that have suffered inflation, devaluation and debt crises even though they print their own currencies? To Ms. Kelton, developing nations suffer a “deficit” of “monetary sovereignty” because they “rely on imports to meet vital social needs,” which requires foreign currency. Why not earn that currency by exporting other goods and services? “Export-led growth . . . rarely succeeds.” China? Japan? Taiwan? South Korea? Her goal posts for “success” must lie far down field.

The problem is that “the rest of the world refuses to accept the currencies of developing countries in payment for crucial imports.” Darn right we do. Her solution: more printed money from Uncle Sam—a “global job guarantee.”

She also advises small and poor countries to cut themselves off from international commerce. They should develop “efficient hydroponic and aquaponics food production” and install “solar and wind farms” rather than import cheap food and oil. They should refuse international investment, with the “classical form of capital controls” under Bretton Woods as an ideal. “We share only one planet,” she writes, yet apparently that planet must have hard national borders.

By weight, however, most of the book is not about monetary theory. It’s rather a recitation of every perceived problem in America: the “good jobs deficit,” the “savings deficit,” the “health-care deficit,” the “infrastructure deficit,” the “democracy deficit” and—of course —the “climate deficit.” None of this is original or relevant. The desire to spend is not evidence of its feasibility.

Much of “The Deficit Myth” is a memoir of Ms. Kelton’s conversion to MMT beliefs and of her time in the hallways of power. She criticizes Democrats, including President Obama and his all-star economic team, for their thick skulls or their timidity to state her truth in public. Republicans, such as former House Speaker Paul Ryan, are just motivated by dark desires to keep the people down and enrich big corporations and wealthy fat cats. President Trump’s tax cuts are a “crime.” How insightful.

In a revealing moment, Ms. Kelton admits that “MMT can be used to defend policies that are traditionally more liberal . . . or more conservative (e.g., military spending or corporate tax cuts).” Well, if so, why fill a book on monetary theory with far-left wish lists? Why insult and annoy any reader to the right of Bernie Sanders’s left pinkie?

Writing the book to “defend” an immense left-wing spending agenda destroys her argument. If you could only feel her singular empathy for the downtrodden, if you could, as she does, view the federal budget as a “moral document,” if you could just close your eyes and need it to be true as much as she does, your “Copernican moment” will arrive, and logic and evidence will no longer trouble you.

That effect is compounded by her refusal to abide by the conventional norms of economic and public-policy discourse. She cites no articles in major peer-reviewed journals, monographs with explicit models and evidence, or any of the other trappings of economic discourse. The rest of us read and compare ideas. Ms. Kelton does not grapple with the vast and deep economic thinking since the 1940s on money, inflation, debts, stimulus and slack measurement. Each item on Ms. Kelton’s well-worn spending wish list has raised many obvious objections. She mentions none.

Update. To "jabmorris" and "rob." How could you possibly know if I have or have not read the book? As a matter of fact, I read every word of it. You offer a false accusation of impropriety, that you could not possibly know anything about, instead of a shred of fact or logic. This seems about par for the course in MMT land.
John H. Cochrane at 7:27 PM
Share