The economy is stuck in slow growth, not the fast growth we should see after a steep recession. (See previous post here, as well as John Taylor on the subject)

But we've heard the defense over and over again: "recoveries are always slower after financial crises."  Most recently (this is what set me off today) in the Washington Times,


Many economists say the agonizing recovery from the Great Recession...is the predictable consequence of a housing market collapse and a grave financial crisis. ... any recovery was destined to be a slog.

“A housing collapse is very different from a stock market bubble and crash,” said Nobel Prize-winning economist Peter Diamond of the Massachusetts Institute of Technology. “It affects so many people. It only corrects very slowly.”

This argument has been batted back and forth, but a new angle occurred to me: If it was so obvious that this recovery would be slow, then the Administration's forecasts should have reflected it.  Were they saying at the time, "normally, the economy bounces back quickly after deep recessions, but it's destined to be slow this time, because recoveries from housing "bubbles" and financial crises are always slow?"

No, as it turns out. I went back to the historical Administration Budget proposals and found the "Economic Assumptions" in each year's "Analytical Perspectives." This gives the Administration's forecast at the time. 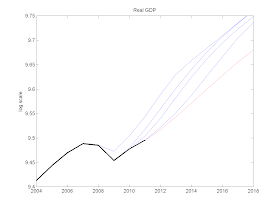 Here is actual real GDP (black line) together with the Administration's forceasts (blue lines). The red line is the current blue chip consensus (also as reported in the budget), which I'll get to in a minute.

As you can see, there is nothing like an inevitable, forecastable, natural, slow recovery from a financial crisis or "housing bubble" in the administration's forecasts.
Their forecasts at the time look just like my quick bounce-back-to-the trend line that you see in my previous posts, and John Taylor's, and lots of others'. And they are surprised each year that the fast recovery doesn't happen.

Here is the same information in growth rates: 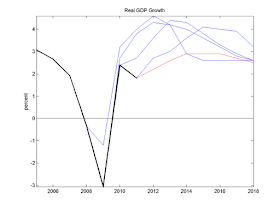 Here you see that each year the Administration was forecasting  that within a year the economy would experience a sustained period of strong, 4% or more, "catchup growth" until it gets back to trend.  And each year they have been disappointed.

So, if a slow recovery is the inevitable result of a financial crisis, why was the Administration forecasting the "normal" fast recovery all along?

The natural conclusion is that the administration thought, as I thought, that the economy should have grown quickly, as it typically has in the past. The "slow growth after financial crises" isn't a fact in the first place. And to the extent that it is a fact (it's a "fact" over a sample of countries not very representative of the US now), slow growth is not the inevitable result of a financial crisis itself, but a result of the mismanaged policy that typically follows a financial crisis, such as bailouts, close-the-barn-door-after-the-horse leaves banking regulation, trampling of property rights that scare creditors away, high taxes and so forth. After all, there isn't any economic theory of this "natural" slowness.

Browsing around the budgets, I found they had made the case even more convincingly than I have. Here are two graphs from the 2010 budget (p. 176, p. 181) 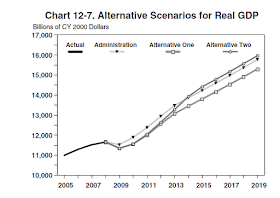 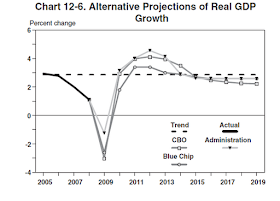 The Administration expected strong growth, financial crisis or no financial crisis. In fact they're a bit defensive that they expect stronger growth than the blue chips.

And the 2012 budget contains this beauty 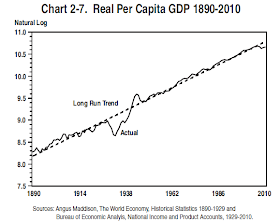 Along with a lovely explanation


Some international economic organizations have argued that a financial recession permanently scars an economy, and this view is also shared by some American forecasters. On that view, there is no reason to expect a full recovery to the previous trend of real GDP. The statistical evidence for permanent scarring comes mostly from the experiences of developing countries and its relevance to the current situation in the United States is debatable. Historically, economic growth in the United States economy has shown considerable stability over time as displayed in Chart 2-7. Since the late 19th century, following every recession, the economy has returned to the long-term trend in per capita real GDP. This was true even following the only previous recession in which the United States experienced a disastrous financial crisis – 1929-1933 – although the recovery from the Great Depression was not complete until World War II restored demand. The U.S. economy has enormous room for growth, although there are factors that could continue to limit that growth in the years ahead.

Ok, except for that silly bit about how great WWII was, (almost echoing Paul Krugman's idea that the key to prosperity is for the government to fake an alien invasion) we seem agreed.

So, the natural conclusion is, what are these "factors" that "continue to limit growth?" If the patient should naturally recover quickly on his own, as every time in the past, perhaps, just perhaps, too much doctoring is to blame?

Now, the red line, the blue chip consensus forecast. The administration's forecast is quite a bit above the blue chips. As it was throughout. A natural interpretation is that this is the usual "rosy scenario" used to make budgets look better. Possible, but I prefer the interpretation that these are honest forecasts, reflecting the natural and correct idea that the economy should spring back quickly from deep recessions, no matter whether associated with more or less financial turmoil.  Really, it make no sense that they knew they were in for 3 years of horrible growth and joblessnes, but just kept putting out ridiculously optimistic forecasts, which they knew would be wrong.

The blue chips could simply be reflecting a more cynical (or in my view, realistic) effect of how bad the Administration's policies would be for growth and recovery. They are supposed to be forecasts of how the economy will behave given policy, not it's "natural tendencies."