Larry Summers has published a very interesting speech, U.S. Economic Prospects: Secular Stagnation, Hysteresis, and the Zero Lower Bound. I heard a version of the same thoughts last October, at the joint Brookings-Hoover conference "The U.S. Financial System—Five Years After the Crisis."

I was struck then, as I am now, at how much consensus there is among macroeconomists. Yes, you heard it here. And Larry expresses it elegantly, as you might expect. While the press talks about recovery, macroeconomists look at output growth and employment and it still looks pretty dismal.

GDP fell in the recession, but has not recovered relative to trend. What was a recession is turning into everyone's nightmare, perpetually slow growth.

Usually, GDP rises back to "potential" or "trend." This time, the "potential" is falling to meet the lackluster results. Potential decline, Larry points out, already closed 5% of the gap, leaving only 5% left. This is starting to look like lack-of-growth theory, not business cycle dynamics.

The unemployment rate is declining, but the employment-population ratio has not budged, even looking at prime-age men to offset some of the demographic effects.

It's also extraordinary because the Washington policy machine has gotten bored with growth or lack of growth and moved on to squabble about other things.

Now, to analysis. Larry makes a very interesting case that fundamental forces in the economy push us to low real interest rates. The ones I found most interesting,


First, reductions in demand for debt-financed investment. ...probably to a greater extent, it is a reflection of the changing character of productive economic activity... Ponder the fact that it used to require tens of millions of dollars to start a significant new venture, and significant new ventures today are seeded with hundreds of thousands of dollars. All of this means reduced demand for investment, with consequences for equilibrium levels of interest rates.


[Fourth] is a substantial shift in the relative price of capital goods [falling about 20% since 1980].. Something similar, but less dramatic, is present in the data on consumer durables. To take just one example, during a period in which median wages have been stagnant over the last 30 years, median wages in terms of automobiles have almost doubled..

Summers points to an interesting calculation of the "natural" rate of interest by Laubach and Williams, which I will have to look up. So far, the "negative natural rate" at the basis of all the new-Keyensian analysis I have read has been a deus-ex-machina, not independently measured. Interesting.

Here, as must be the case, inevitably, we part company. It's a quantitative problem. The natural rate is per Laubach and Williams, about -0.5%. But we still have 2% inflation, so the actual real interest rate is -1.5%, well below -0.5%. With 2% inflation, we need something like a 4-5% negative "natural rate" to cause a serious zero bound problem.  While Summers' discussion points to low interest rates, it is awfully hard to get any sensible economic model that has a sharply negative long run real rate

Moreover, to Summers, the one and only problem worth mentioning in the US economy is that the "natural rate" is negative while nominal rates cannot fall below zero. Can't we think of one single solitary additional distortion in the American economy?

What to do? Summers sees the problem as eternal lack of "demand" and recommends more of it. I think this more of a microeconomic/lack of growth theory problem needing the removal of distortions.

We still agree a bit -- Summers starts with "There is surely scope in today’s United States for regulatory and tax reforms that would promote private investment." That's distortion removal.

And I am interested that his calls for stimulus do not rely on the idea that consumers ignore the fact that government debt must be repaid. "Although it should be clear from what I am saying that I do not regard a prompt reduction in the federal budget deficit as a high order priority for the nation, I would be the first to agree with Michael Peterson and his colleagues at the Peter G. Peterson Foundation that  credible long-term commitments would be a contributor to confidence." Apparently the confidence fairy reads Ricardo, as do fully-Ricardian new-Keynesian models.

It's hard to object to "policies that are successful in promoting exports, whether through trade agreements, relaxation of export controls, promotion of U.S. exports, or resistance to the mercantilist practices of other nations when they are pursued, offer the prospect of increasing demand," though that can quickly be misread as invitation to our own mercantilist efforts.

But this is all small potatoes, compared to 5% loss of potential, 5% loss of GDP, and a creepingly slow escalator, no? So, really the core of Larry's prescription is


as I’ve emphasized in the past, public investments have a potentially substantial role to play...ask if anyone is proud of Kennedy Airport, and then to ask how it is possible that a moment when the long-term interest rate in a currency we print is below 3 percent and the construction unemployment rate approaches double digits is not the right moment to increase public investment in general—and perhaps to repair Kennedy Airport in particular

It's hard to argue with fixing potholes, especially in Chicago. And there is no argument against investment that earns a positive rate of return. The question, though, is not whether those are good investments but whether making such investments can raise GDP 5%, potential GDP by 5%, and raise the desultory growth rate.  Even at a multiplier of one, there are not $750 billion of positive net present value roads and bridges to build -- and we haven't started with the opposition of anti-sprawl and environmental lobbies who don't want roads and bridges built in the first place. The Keystone pipeline, and LNG export terminals are infrastructure too. (I should be careful however. There surely are $750 billion a year of alternative-energy boondoggles to build!) 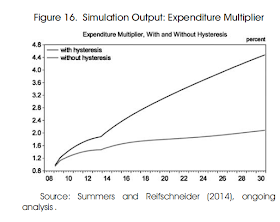 Here, of course, Summers thinks multipliers -- even multipliers for tax financed (notice the Ricardian comment) and wasted (that's in the models, the usefulness of the infrastructure has nothing to do with the multiplier) is in the range of 4 to 5.

To me, this is just magical thinking -- that the key to long run prosperity is government spending, even if wasted.

But these are old arguments, and I did not write to rehash old controversies. From my point of view, the speech is an eloquent statement of the problem, and the gulf between Summers and people who think like I do is much narrower than the gulf between macroeconomists and the policy establishment which is not even thinking about slow growth anymore. From my point of view, the focus on and evident emptiness of the "demand" solution -- its reliance on magic -- just emphasizes where the real hard problems are.

A last note of praise. Notice Summers said nothing about the minimum wage, the earnings of the top 1/10 of a percent, and other fixations of the current partisan squabble.