I attended the NBER EFG (economic fluctuations and growth) meeting a few weeks ago, and saw a very nice paper by Rabah Arezki, Valerie Ramey, and Liugang Sheng, "News Shocks in Open Economies: Evidence from Giant Oil Discoveries" (There were a lot of nice papers, but this one is more bloggable.)

They look at what happens to economies that discover they have a lot of oil. 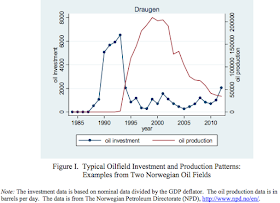 An oil discovery is a well identified "news shock."

Standard productivity shocks are a bit nebulous, and alter two things at once: they give greater productivity and hence incentive to work today and also news about more income in the future.

An oil discovery is well publicized. It incentivizes a small investment in oil drilling, but mostly is pure news of an income flow in the future. It does not affect overall labor productivity or other changes to preferences or technology.
Rabah,Valerie, and Liugang then construct a straightforward macro model of such an event.

Utility comes from consumption and work. The production function has an oil sector and non-oil sector. There are adjustment costs to investment and to reallocation of capital between oil and non-oil sectors. The consumption good is tradeable, and the economy sells oil internationally to get it as well as to produce it. 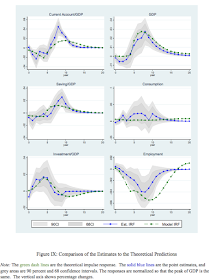 They compute impulse-response functions to big oil discoveries, and compare the model dynamics to the response functions. It's a nice fit and an intuitive story. After the shock hits, during the period of investment, the current account declines -- borrow money, buy oil investment goods and also borrow to finance higher consumption now. GDP is basically flat, as oil investment is a small fraction of the economy. Savings also declines. Consumption goes up right away, and then stays up in permanent income fashion. (You have to look closely at the green line, because the vertical scale is too small.) Investment rises, to build those oil wells.

Employment declines, as there is a wealth effect encouraging leisure but no higher productivity of labor to encourage work. This is why productivity shocks, emphasizing a temporarily higher marginal product of labor, are important in real business cycle models.

Once oil comes on line, the current account changes sign, as the economy exports oil and pays back debt. GDP, including the oil, rises. Consumption stays were it was, by permanent income logic. And investment returns to zero.

Valerie, presenting the paper, was a bit discouraged. This "news shock" doesn't generate a pattern that looks like standard recessions, because GDP and employment go in the opposite direction.

My comment was something to the effect of "this paper is much more important than you think. You match the dynamic response of economies to this large and very well identified shock with a standard, transparent and intuitive neoclassical model. Here's a list of some of the ingredients you didn't need: Sticky prices, sticky wages, money, monetary policy, (i.e. interest rates that respond via a policy rule to output and inflation or zero bounds that stop them from doing so), home bias, segmented financial markets, credit constraints, liquidity constraints, hand-to-mouth consumers, financial intermediation, liquidity spirals, fire sales, leverage, sudden stops, hot money, collateral constraints, incomplete markets, idiosyncratic risks, strange preferences including habits, nonexpected utility, ambiguity aversion, and so forth, behavioral biases, nonexpected utility, or rare disasters. If those ingredients are really there, they ought to matter for explaining the response to your shocks too. After all, there is only one economic structure, which is hit by many shocks. So your paper calls into question just how many of those ingredients are really there at all."

Thomas Philippon, whose previous paper had a pretty masterful collection of a lot of those ingredients, quickly pointed out my overstatement. One needs not need every ingredient to understand every shock. Constraint variables are inequalities. A positive news shock may not cause credit constraints etc. to bind, while a negative shock may reveal them.

Good point. And really, the proof is in the pudding. If those ingredients are not necessary, then I should produce a model without them that produces events like 2008. But we've been debating the ingredients and shock necessary to explain 1932 for 82 years, so that approach, though correct, might take a while.

In the meantime, we can still cheer successful simple models and well identified shocks on the few occasions that they appear and fit data so nicely. Note to graduate students, this paper is a really nice example to follow for its integration of clear theory and excellent empirical work.
John H. Cochrane at 7:00 AM
Share