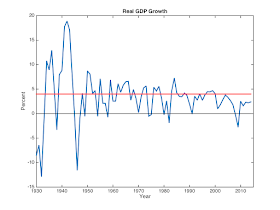 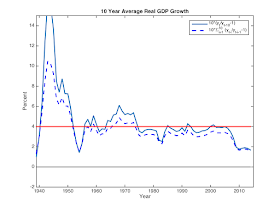 Timothy Noah from Politico called yesterday to ask if I thought four percent growth for a decade is possible. Story here. In particular he asked me if I agreed with other economists, later identified in the story, who commented that it has never happened in the US so presumably it is impossible.

This prompts me to look up the facts, presented in the charts at left. The top graph is annual GDP growth. The bottom graph gives decade averages. Data here. The red lines mark the 4% growth point. Notice the sad disappearance of growth in the 2000s.

Judge for yourself how far out of historical norms a goal of 4% growth is.

By my eye, avoiding a recession and returning to pre-2000 norms gets you pretty close.  A strong pro-growth policy tilt, cleaning up the obvious tax, legal, and regulatory constraints drowning our Republic of Paperwork (HT Mark Steyn) only needs to add less than a percent on top of that. 4% might be too low a target!

Note the question asks about real GDP not per capita. Adding capitas counts. If you want total GDP to grow, regularizing the 11 million people who are here and letting people who want to come and work and pay taxes counts toward the number. You may argue with the wisdom of that policy, but the point here is about numbers.


This is not a serious answer to the question whether 4% growth is possible. The serious answer looks hard at demographics and productivity, estimates how far below the free-market nirvana level of GDP we are, and estimates how much faster free-market nirvana GDP could grow.  If you think that sand in the gears or inadequate infrastructure or not enough stimulus means we're 20 percent below potential, and potential can grow 2% per year, then 4% growth for a decade follows.

What happened in the past is largely irrelevant, since the US has never experienced free-market nirvana. If you were to look in 1990 at historical Chinese GDP plots to assess whether it is possible for China to grow as it has for the last 25 years, you'd say it's impossible. Conversely, if you were to look at postwar US data you'd say our lost decade of 2% growth can never happen.

But, having asked the question whether four percent is outside of all US historical experience, at least it's interesting to know the answer.

Update. A few commenters asked about my 10 year average plot. I've updated it to include two ways of calculating the 10 year growth rate. The solid line is the ten year percentage growth rate divided by ten. The dashed line is the ten year average of one year growth rates. You can also haggle about compounding,  logs vs levels, which price index to use, long-term inflation measurement (that can add as much as 1%), whether some components of GDP should be excluded and so on. Calculated either way, I conclude that 10 years of 4% growth is not an outlandish impossibility. After all, the policy choices being advocated for 4% growth go a good deal beyond rewinding the clock to exactly the policies and laws of some bygone era. But make up your own minds.