Sclerotic growth is America’s overriding economic problem. From 1950 to 2000, the U.S. economy grew at an average rate of 3.5% annually. Since 2000, it has grown at half that rate—1.76%. Even in the years since the bottom of the great recession in 2009, which should have been a time of fast catch-up growth, the economy has only grown at 2%. Last week’s 0.5% GDP report is merely the latest Groundhog Day repetition of dashed hopes.

Looking ahead, solving almost all of America’s problems hinges on re-establishing robust economic growth. Over the next 50 years, if income could be doubled relative to 2% growth, the U.S. would be able to pay for Social Security, Medicare, defense, environmental concerns and the debt. Halve that income gain, and none of those spending challenges can be addressed. Doubling income per capita would help the less well off far more than any imaginable transfer scheme.


Why is growth slowing down? One camp says that we’ve run out of ideas. We were supposed to have flying cars and all we got was Twitter. Get used to it, the thinking goes, and start fighting over the shrinking pie.

The third camp (mine) holds that the U.S. economy is simply overrun by an out-of-control and increasingly politicized regulatory state. If it takes years to get the permits to start projects and mountains of paper to hire people, if every step risks a new criminal investigation, people don’t invest, hire or innovate. The U.S. needs simple, common-sense, Adam Smith policies.

America is middle-aged and overweight. The first camp says, well, that’s nature, stop complaining. The second camp looks for the latest miracle diet—try the 10-day detox cleanse! The third camp says get back to the tried, true and sometimes painful: eat right and exercise.

The first two camps are doubtful. How much more growth is really possible from better policies? To get an idea, see the nearby chart plotting 2014 income per capita for 189 countries against the World Bank’s “Distance to Frontier” ease-of-doing-business measure for the same year. The measure combines individual indicators, including starting a business, dealing with construction permits, protecting minority investors, paying taxes and trading across borders. Unlike the more popular ease-of-doing business rankings, this is a measure of how good or bad things are with 100 being the best observed so far, or “Frontier,” score. 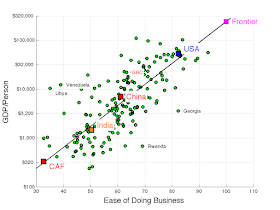 The U.S. scores well, but there is plenty of room for improvement. A score of 100 unites the best already-observed performance in each category. So a score of 100—labeled Frontier—is certainly possible. And, following the fitted line in the chart, Frontier generates $163,000 of income per capita, 209% better than the U.S., or 6% additional annual growth for 20 years. If America could improve on the best seen in other countries by 10%, a 110 score would generate $400,000 income per capita, a 650% improvement, or 15% additional growth for 20 years.

If you think these numbers are absurd, consider China. Between 2000 and 2014, China averaged 15% growth and a 700% improvement in income per capita. This growth did not follow from some grand stimulus or central plan; Mao tried that in the 1960s, producing famine, not steel. China just turned an awful business climate into a moderately bad one.

It is amazing that governments can do so much damage. Yet the evidence of the graph is strong. The nearly controlled experimental comparison of North Korea versus South Korea, or East Germany versus West Germany, is stronger. But if bad institutions can do such enormous harm, it follows inescapably that better institutions can do enormous good.

A growth agenda doesn’t fit neatly into current policy debates. This is fortunate, as new ideas are easier to swallow than defeats.

Parties argue over tax rates, but what’s really needed is deep tax reform, cleaning out the insane complexity and cronyism.

Parties argue over how much to raise or cut spending for social programs, but what’s needed is a thorough overhaul of the programs’ pernicious incentives. For example, Social Security disability needs to remove its disincentives to work, move or change careers.

Parties argue about education spending, but America needs the better schools that come from increased choice and competition.

Most of all, the country needs a dramatic legal and regulatory simplification, restoring the rule of law. Middle-aged America is living in a hoarder’s house of a legal system. State and local impediments such as occupational licensing and zoning are also part of the problem.

Growth-oriented policies will be resisted. Growth comes from productivity, which comes from new technologies and new companies. These displace the profits of old companies, and the healthy pay and settled lives of their managers and workers. Economic regulation is largely designed to protect profits, jobs and wages tied to old ways of doing things. Everyone likes growth, but only in someone else’s backyard.

There is hope. Washington lawmakers need to bring about a grand bargain, moving the debate from “they’re getting their special deal, I want mine,” to “I’m losing my special deal, so they’d better lose theirs too.” While the current presidential front-runners are not championing economic growth, House Speaker Paul Ryan (R., Wis.) and other House members are. And if economic-policy leadership moves from a chaotic presidency to a well-run Congress, that may be healthy for America’s political system as well as for the economy.

Update: response to some criticis
John H. Cochrane at 5:00 AM
Share