The fire in Treasurys

Just where was the fire that caused the Federal Reserve to buy $1.3 trillion of treasury debt in a month -- financing all treasury sales and then some? I've been puzzling about this question in a few posts, most recently here. Commenter "unknown" impolitely but usefully points me to a nice paper by Andreas Schrimpf, Hyun Song Shin and Vladyslav Sushko that explains some market mechanics. I am still not persuaded that these gyrations motivate or justify the Fed buying these or more trillions of debt, but there is an interesting story here.

Their first graph shows stock prices and bond yields. As risk and risk aversion rose, as they always do in bad times, stock prices fell and bond prices rose, with yields falling. 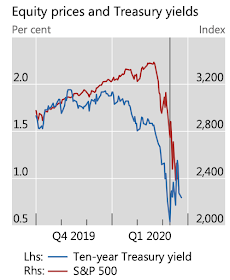 Trouble starts on  9 March when "the market experienced a snapback in yields" Look hard at the graph. The blue line rises a bit while the red line continues to fall.

What caused the "snapback?" here is where the paper gets interesting. Basically a bunch of hedge funds replayed an age-old strategy and got caught. Plus ça change. They bought treasury bonds and simultaneously sold them in futures markets. Since treasury bonds are great collateral they can lever up a small price difference to make a lot with little investment.

But even arbitrage opportunities are not risk free.** Prices that are slightly off can get further off before they eventually converge. And then the hedge funds need to post margin, which they don't have. So, they follow the mother of all financial fallacies -- risk management that consists of selling  positions on the way down, trying to synthesize a put option with a stop loss order. But selling to who? Everyone else is doing the same thing, markets get illiquid in times of stress (no, they've never done that before), so the price difference widens even more.


Once the funds were no longer able to meet variation margins, their positions were unwound by dealers/futures exchanges, pushing prices lower. This in turn gave rise to a classic “margin spiral” 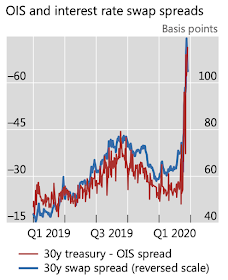 This is similar to the price difference that the funds had been arbitraging. The price widened -- the arbitrage got better. But this means a lot of lost money in the initial positions.

Other almost-arbitrage price relationships widened too, a now familiar phenomenon 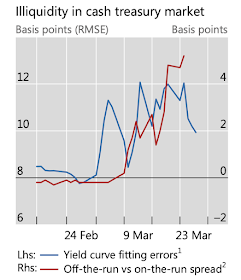 How in the world did this happen again, so soon?  LTCM redux? Metallgesellschaft? In the treasury markets? Didn't 12 years and 100,000 pages of Dodd Frank, and ten times that of academic papers on various "fire sales" and "spirals," and a small army of regulators put a stop to all this? All the massive regulation did, apparently,  was to further restrict dealer and bank balance sheets, as seen in the repo eruption last summer, and make liquidity worse.


..market monitoring should look beyond current conditions and ask the “what- if” questions that are relevant for potential market stresses. To be effective, such fully fledged stress tests must assess the potential scope for forced selling and feedback loops, especially in tranquil periods when leverage is building up.

"Should have" is is the right verb tense! Just why in 12 years did none of this perfectly obvious stress testing already happen?

They provide one answer implicit:


In this context, the reaction function of the central bank is an important background factor.

Yes. Everyone knew the Fed will ride to the rescue, so why keep dry powder around? And the expectation proved true once again. The Fed is fueling the moral hazard as we speak.

So,  a bunch of hedge funds sold volatility, again, and lost money, again. Little apparent arbitrage opportunities arose between similar securities. (Is 12 basis points a financial calamity? four?). Not enough investors with the expertise to arbitrage 4 basis points spreads are around willing take mark-to-market risk in a time of immense volatility and uncertainty. Capital does move slowly. It was harder for a while for other people whose idea of risk management is selling on the way down to dump securities.

Does this justify buying $1.3 trillion of treasury debt? Is it a problem if occasionally some traders can't immediately sell out of these kinds of trades and have to invest just a bit of money? Must no bid/ask spread ever widen? Do we want zero incentive to lurk around and move capital more quickly?

Financing the treasury and buying the debt


Under normal circumstances, dealers would be able to alleviate market stresses by absorbing sales and building up an inventory of securities. But, dealers’ treasury inventories had already been stretched, especially from 2018 onwards, as they needed to absorb a large amount of issuance (Graph 3, right-hand panel). Far from there being a shortage of safe assets, there was a glut* in the run-up to Covid-19. 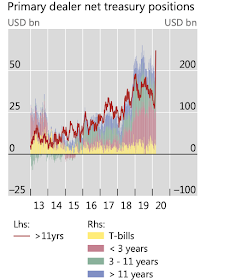 I found this comment particularly revealing, but opening a lot of questions. We are so used to the claim of a "global savings glut" "safe asset shortage"  that signs of these stories running out of steam are  interesting.

This could be a question to which massive purchases are the answer -- the treasury is finding it hard to sell more debt. Of course, treasuries that turn to central banks to buy their debt is not a circumstance that usually ends well.


The recent shifts in the investor base of treasury securities from official sector investors (eg foreign central banks) and long-term investors towards leveraged traders and other negative convexity investors give pause for thought regarding potential future volatility from endogenous feedback loops.

Wow. If this is true, the game is up. We can't sell trillions and trillions to, oh, the central bank of China. But "negative convexity investors" are not a fundamental source of demand. They buy treasurys only to sell futures, and quickly close out their positions. They are not funneling a trillion dollars a month of new savings to treasurys. So if this story is true, there are no fundamental investors, and that's why the Fed is buying.

The paper attempts to give a different rationale, that the Fed really was buying in order to make the markets more liquid. (Again, just why this is a huge social problem is hard to tell) The paper claims that the markets calmed because the Fed bought up all these extra treasurys from the dealers, removing the treasurys from the dealer's books. In order to get dealers to arbitrage again,


the authorities [Fed] may need to absorb sales directly rather than doing so indirectly by lending to dealers, especially when funding is not the relevant constraint. This may also explain why, on this occasion, the Fed’s rapid purchases of securities out of dealers’ inventories (to the tune of about $670 billion) appeared more effective in stabilising the market than the provision of liquidity via repo operations, where take-up was relatively subdued.

Translation: the big puzzle in all of this is how the Fed by simply buying can restore "liquidity." To restore liquidity you have to buy and sell, take the arbitrage trades.

Normally (and to the tune of trillions right now in other markets) the Fed simply lends money to dealers who can then trade more. (And make more money. Remember the Volcker rule, don't finance trading by deposits? The idea here is to finance trading by borrowing from the Fed!) But if the dealers are capital constrained, or regulation constrained, that doesn't help. So if the fed buys up all the risky assets from the dealers, the dealers can start up all over again.

I presume the last graph doesn't have up to the minute data and would show... -$470 billion on dealer balance sheets? To buy $200 billion from the dealers why did the Fed have to buy $1.3 trillion?

Why did dealers accumulate so much treasury debt in the first place? If they didn't want to hold the treasurys they should have sold them, and prices should have gone down -- interest rates should have gone up. They had to want to hold the treasurys. That proved a wise decision as they made  ton of money as interest rates declined. But after yields went from 2 to 0.5%, in the "de-risking" demand for treasurys, why didn't they sell off their book again? How much more money do they want to make? Why did they finally sell to the Fed (at what price?)

So why did the Fed buy? Is it a  “dealer of last resort” as the paper puts it, or is it the  buyer of last resort? Was there really a fire, or just the usual bunch of hedge funds screaming that they lost money writing out of the money puts, once again?

* Picky comment. Economists should never use the word "shortage" or "glut," at least absent a price control. They carry a pejorative implication that something is wrong about a demand or supply curve shifting, and needs policy response. The original "savings glut" was East Asian countries that decided keeping some liquid assets around was a good idea in case of trouble, a strikingly old fashioned idea that might look mighty good right now as pervasively indebted America looks around to pay bills for a few months.


**Update: I meant this as a joke, which is probably too subtle as Monika points out in a comment. A true  arbitrage opportunity is of course a sure profit, with no chance of losing money. If you buy cash and sell futures at a different price, and hold to expiration, that is an arbitrage. But when you look at the path, this "arbitrage" is not really an arbitrage as we in finance define one, because you may have to post cash collateral along the way if prices go the wrong way. This little detail has ensnared who knows how many clever traders.  The Wall Street use of the word "arbitrage" means exactly the opposite of arbitrage, namely taking bets.
John H. Cochrane at 4:45 PM
Share