David Splinter and Gerald Auten gave last week's Hoover Economic Policy Working Group seminar, summarizing their past and some work in progress on the distribution of income.  Link in case the above embed does not work. A recent paper. Splinter's web page.

Splinter and Auten are very even handed, just-the-facts, economists. I'll pass on their facts. Grumpy interpretations are my own.

It is a fact generally accepted that income inequality has grown a lot recently, and this is a "problem" to be "solved." So what if the great inequality crisis simply isn't true? Let's leave aside whether income is a good measure (it isn't), let's just look at the fact, has income inequality substantially increased? 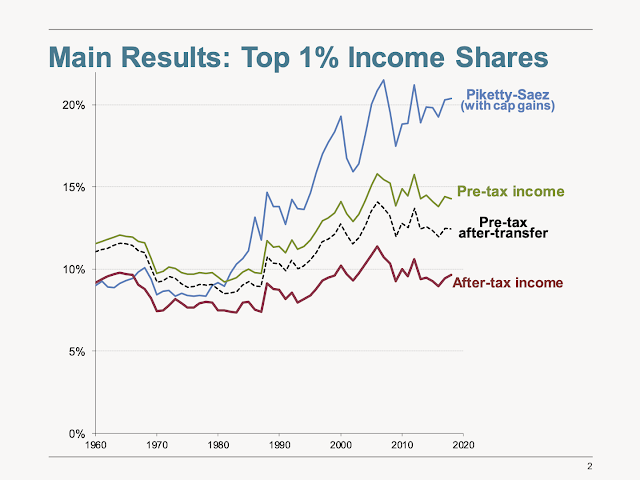 No. Here is the headline result. In their careful redoing of the numbers, the top 1% share of income has barely budged since the 1970s. (And, by the way, if you think the mid 1970s economy was the great happy prosperity we should try to reestablish, you're too young to remember the 1970s.)

Now we get in to a deep under the hood exercise about costing up income, and where did Piketty and Saez go wrong. The video has some of that. The papers have more, and a long list of back and forth, including comparisons with many other studies. I'll name just a few.

One can quibble, but one can quibble. At least this cornerstone "fact" of political debate is a lot less sure than it looks. 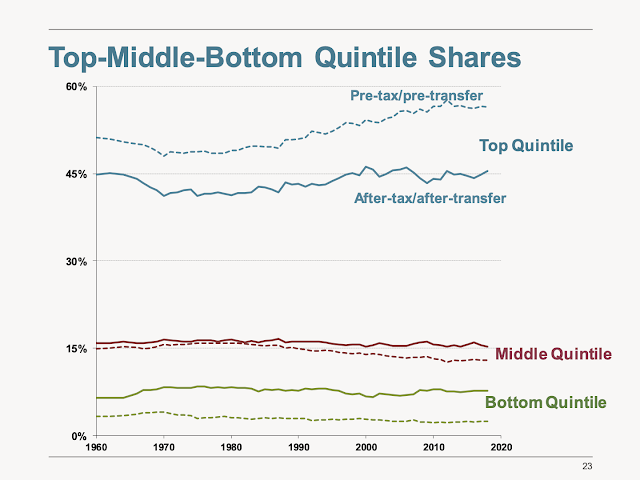 More interestingly, let's get past shares and look at the second great article of contemporary faith: Have people of lower incomes really not done any better in the last decades?  What is their actual income, not just their share? 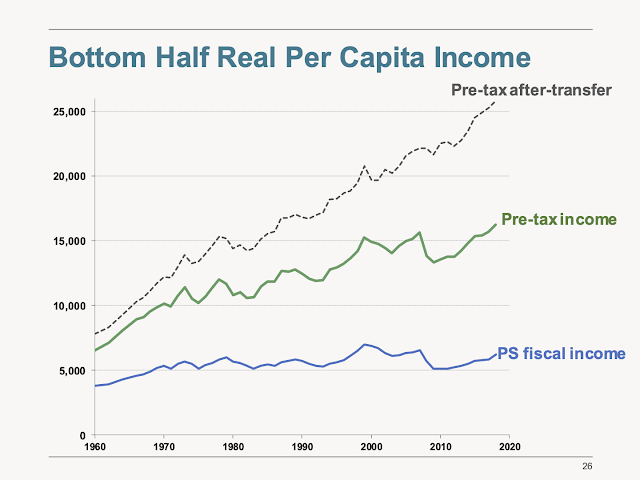 Even this is misleading, because the actual people are different. Those with low income today are different people than those with low income in 1970. Even if the the PS graph were correct, it would be false to say that "the poor got poorer" because they are different people. Suppose, for example that everyone stays the same over a lifetime, but that wages grow faster over time. The poor (young) would be poorer and the rich (old) richer, but yesterday's poor are today's rich, and the distribution of lifetime income unchanged. That's not what happened, just a story to illustrate the confusion 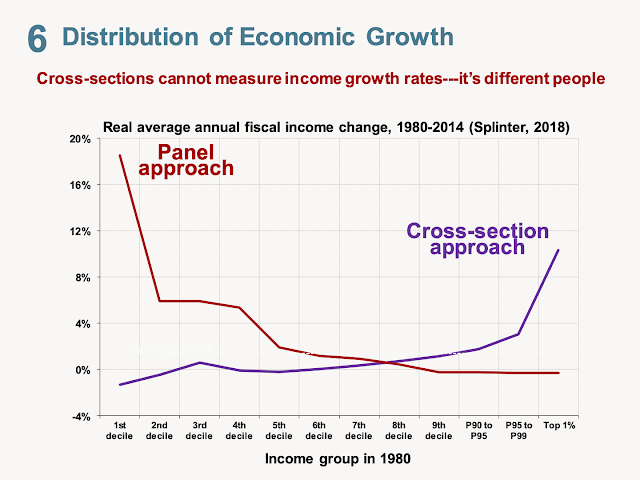 The "cross section" approach looks at income growth of each percentile, i.e. how much is the income of today's top 1% different from the 1980s' top 1%. It does look like "the wealthy got all the gains."
But the "panel approach" looks at the experience of actual people. If you look at people who were in the first decile in 1980, how much has their, personal income grown over time? We see the opposite pattern. People who had very low incomes saw much more growth.

A third article of current faith, "the rich don't pay their fair share, and are paying less taxes" In fact, the US tax and transfer system is one of the most progressive in the world. 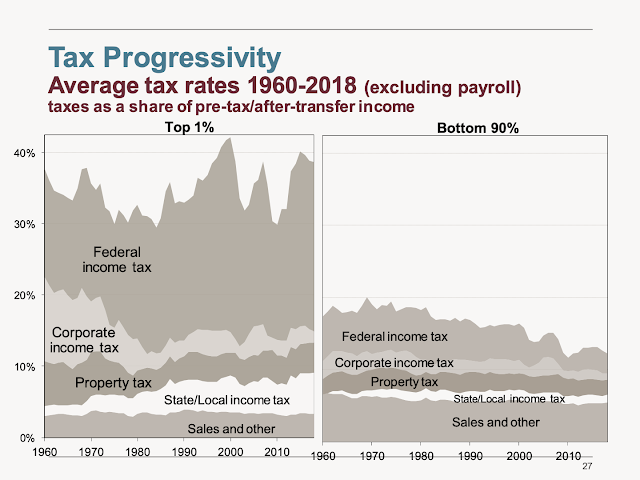 This is a lovely graph as it properly includes all taxes not just federal income taxes. 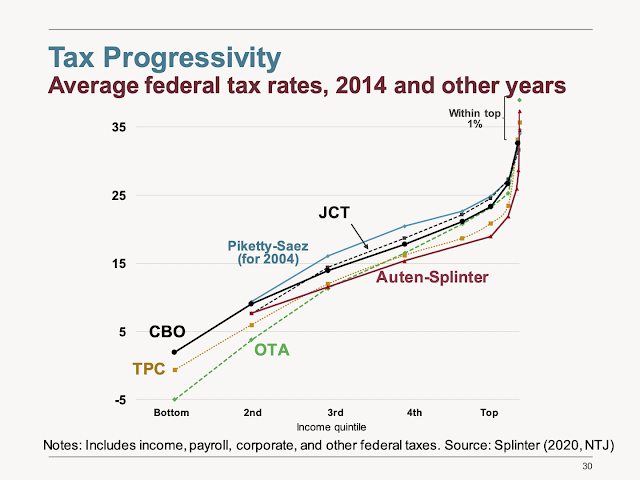 These are just taxes, including tax credits to generate negative numbers at the bottom. They do not include transfers, i.e. negative taxes.

Ah the good old 1950s when we really stuck it to rich people? Also false. 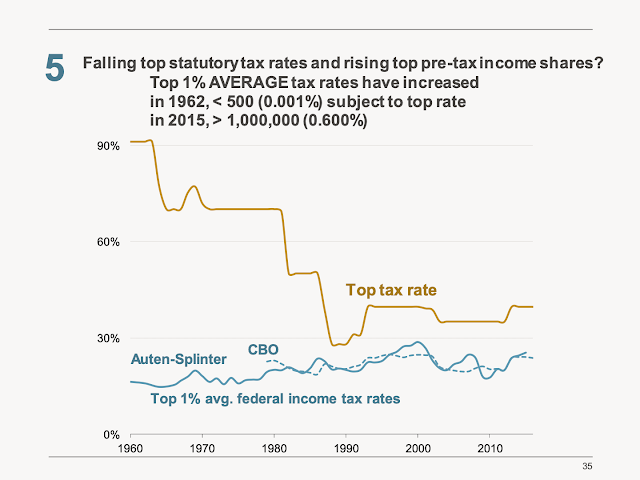 Even in events like Hoover donor reunions I am asked "what is the conservative answer to inequality?" My stock answer is that inequality is not a problem. If you think inequality is a problem, then you think the world is better off if Bill Gates is $1000 poorer and you are $10 poorer. A good interpretation of the feeling "inequality is a problem" is not the intolerable envy of the super-rich but the barriers to opportunity that people with low incomes face in the US. Now we have something to talk about and a fixable problem. Let's start with atrocious public schools in thrall of teacher's unions.

But even if you don't buy every one of Auten and Splinter's numbers, it is not at all obvious that the "problem" of increasing inequality is real in the first place.

The problem of lack of opportunity, barriers to advancement, remains. And even if it isn't getting a lot worse, it was bad enough in the 1970s. Let's get to work on the real problems.