The institutions of civil society are now thoroughly politicized. "Wokeness" is their ideology and religion,  and mastering an ever-changing arcane vocabulary is now the key to access to the elite, as well as making sure you're not the next one sent to the proverbial Gulag.

I can't keep up with everything in this vein. Still, I've been silent long enough, so I think it's worth passing along interesting tidbits as they come.

A few items on this theme came across the transom last week, that seem fun to share. The American Medical Association issued an official 54 page document instructing all doctors on proper language. (Twitter source with more commentary.)

Mind you, as in other cases, this isn't just opinion -- I'm a radical free speech advocate, say and write what you want. It's the official opinion of a scientific professional society, formerly a-political. 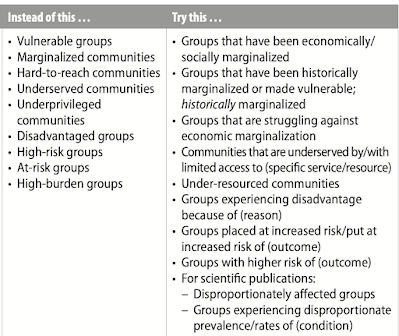 I found this document interesting, among other reasons, because I thought I already spoke woke. I thought the left hand column was already the Proper Terminology. They are, after all, already in the mandatory passive voice. How wrong I was! How many more mouthfuls of word salad it is going to take to get through a sentence. Or.. last point, to get an article accepted in a medical journal.

This is revealing. Apparently human choice and agency are to be completely ignored. People do not choose to use PPE or avoid the doctor. They have are under-resourced.
I guess the larger mandate is that passive is not enough. One must allude to a specific causal external channel for every outcome, every time.

Another capsule. If you thought you were going to get through a faculty meeting using the proper terminology on the left, I have news for you. Again, we add to the passive, with a vague allusion that every ill is "society's" fault a specific  "intentionally." Every time.

Well, at least the instruction is short and clear. So much for the Declaration of Independence. 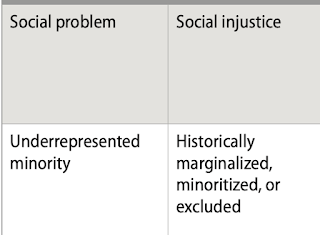 Every problem is an injustice. I've heard "minoritized" cropping up, and actually I sort of like it. It means this is not my identity, it's what you choose to call me. I suppose I would get in huge trouble for asking to be referred to as "whitized."
The doozy: 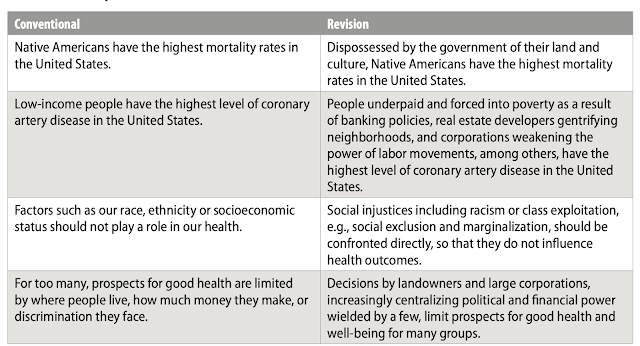 Simple statements of fact are now officially disapproved by the American Mecdical Association. If you were dubious how I could label the effort "political," this puts that doubt to rest.
It is rather astounding that a medical, scientific, society should now prescribe that a specific causal channel be included for every reference to simple correlations.
***************
Bari Weiss's substack offers a beautiful essay by Batya Ungar-Sargon. It offers a powerful insight. The  essay is mostly about what in the heck happened to media, but the essay offers a larger point. Batya notices that this is mainly an affectation of wealthy coastal elite white people. Why?

...Wokeness perpetuates the economic interests of affluent white liberals....perhaps unconsciously, they sought a way to reconcile the inequality that their meritocratic status produces with the compassionate emotions they feel toward the less fortunate. They needed a way to be perpetually on what they saw as the right side of history without having to disrupt what was right for them and their children.

A moral panic around race was the perfect solution...

In other words, wokeness provided the perfect ideology for affluent, liberal whites who didn’t truly want systemic change if it meant their children would have to sacrifice their own status, but who still wanted to feel like the heroes of a story about social justice, who still wanted to feel vastly superior to their conservative and even slightly less radical friends. ...

Racism is still a blight on American life. But wokeness is not how we heal; it has simply redefined the problem to the benefit of educated elites. By focusing on immutable characteristics like race, the woke moral panic has allowed economic elites to evade responsibility for their regressive view that elites should not only exist but rule. ...

Notice how "inequality" vanished a while ago? (As did women.) Doing something about that might have been uncomfortable. Wokeness is an excellent and hard-to-master luxury belief, and thus a powerful class signifier. Try getting in to Harvard (or Stanford) if you have not mastered this language.  Wokeness is absolutely not socialist. Marxists are aghast -- they said class matters. Faced with the actual systemic racism of the public schools, it's so much easer to pick up the kids from private schools, go back to the gated community, put on a hair shirt, and read CRT prayers.
***************
Economics is only a bit late to the party. Our official professional association, the American Economics Association, posts this on its website.

Again, I'm a radical free speech advocate. I have no problem with the authors expressing their opinions. Go for it, write what you want. Write opeds, blog posts, tweets. Add some facts and submit it for peer review at the AER. The way things are going these days, you have a pretty good shot. My complaint is that the American Economic Association, our national professional society, accepts this report, posts it on our website, and thereby endorses these opinions as fact.
The NBER has a strict policy, that you may not advocate policy, even in your own working papers. In reports written for the institution, and bearing the institution's seal of approval, the prohibition is doubly strong. The AEA might want to consider if political advocacy is in it's long run interest as well. Can an association member disagree with this? Can one write an article in the AEA that presents contrary evidence? It is an official pronouncement of the association.
*********
Update: Alex Tabarrok is excellent on the AMA

The AMA’s Advancing Health Equity: A Guide to Language, Narrative and Concepts is so over the top I thought at first it was satire from the BabylonBee. The guide, for example, recommends that instead of talking about poor health among low-income people that physicians should blame “landowners and large corporations” for “increasingly centralizing political and financial power wielded by a few” and limiting “prospects for good health and well-being for many groups.” Put aside that this is at best tendentious and at worst utterly fallacious and just imagine that you are a landowner or work for a large corporation (that’s most of us!). Would you trust a doctor spouting this rhetoric or might you feel that such a doctor doesn’t have your best interests at heart?

Quoting Conor Friedersdor in The Atlantic,

It’s already hard enough to get my conservative grandfather to heed his doctors about how best to care for a bad back worn down from decades in construction. A new narrative meant to problematize real-estate developers or individualism would not improve his medical condition, but it would inflame his temper.