A few Stanford colleagues got together to talk about inflation, and that gave me an incentive to summarize recent writings as compactly as possible. Here goes, and thanks to everyone for a great discussion. 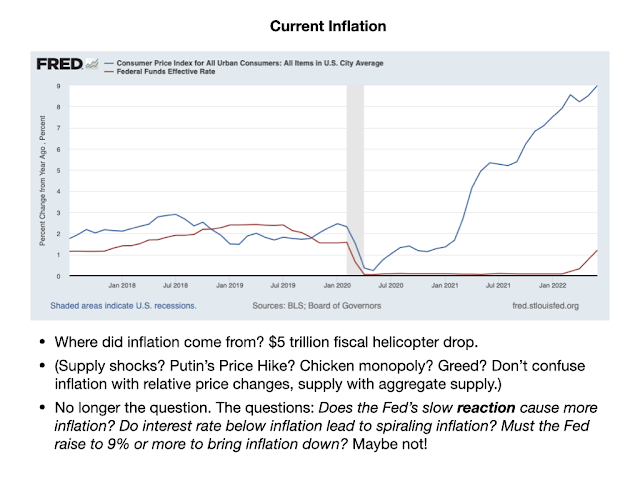 Here we are, 9% inflation. Yes, I think it came from the big fiscal helicopter drop. Others have other theories.
Don't confuse inflation with relative prices. An oil price shock can make oil more expensive than other things. But it does not determine whether oil goes up 10% and wages go up 5%, or oil goes down 5% and wages go down 10%. The central phenomenon is a decline in the value of money, that prices and wages all go up together. The clearest indication that is the phenomenon is that wages are going up. Of course people and politicians care most about prices relative to wages. But don't let that confuse us about the economic issue.
The important question right now is, will the Fed's slow reaction lead to spiraling inflation? Conventional economic wisdom says that it takes interest rates above inflation to bring inflation down. As long as interest rates are below inflation, inflation will spiral up. That needs 10% or more interest rates, now. But the Fed thinks that interest rates are already "neutral," meaning that a 2.25-2.5% interest rate and 9% inflation does not push inflation up any more. How can they believe this?
Markets also believe that inflation will largely go away on its own, with no period of interest rates substantially above inflation:
Right now (right side of graph), markets think that inflation 5 years from now (lower blue line) will be 2.5%, and average inflation in the next 5 years will be about 3.4%. And these numbers have come down recently! Of course these markets like the Fed completely missed the emergence of inflation: both numbers were 2.5% in January 2021 on the day that inflation broke out. But that's their current forecast.
And here is the market forecast of interest rates. Markets think rates will rise briefly to 3.5%, but then go quickly back down to 2.5%. Inflation goes away on its own. How can that be?
So much for the real world, how does it work in theory? 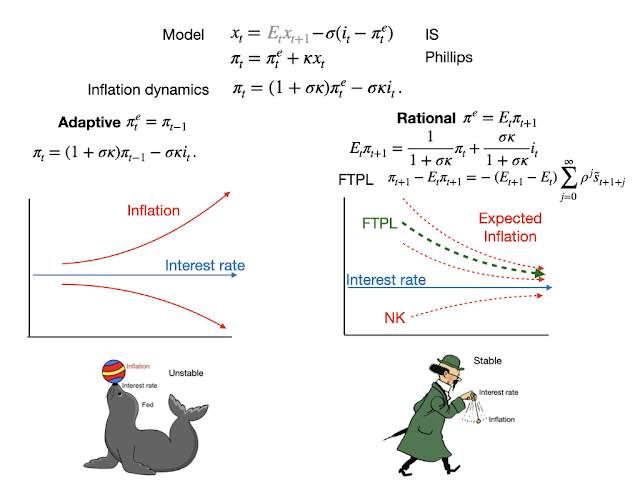 This slide boils down 50 years of macroeconomics. i is interest rate, pi is inflation, x is output, the rest are parameters. There are two basic ingredients. First in "IS", higher real interest rates -- nominal interest rate i less expected inflation -- lowers output x. (The correct equation has the grayed out term, but that doesn't turn out to matter for these points.) Second, in "Phillips," inflation is higher if people expect more inflation in the future -- in that case, raise prices now -- and if the economy is booming.
Now, put those ingredients together, and we have the dynamic relationship between interest rates and inflation shown in the third equation.
But what is expected inflation? Starting with Milton Friedman in 1968, and proceeding through the Keynesian tradition since then, conventional wisdom says expected inflation is driven by whatever happened last year, "adaptive" expectations. Substitute that in, and you have the dynamics just above the left hand graph.
Inflation = (number bigger than one) x last year's inflation minus (number) times interest rate.
(Number bigger than one) means that inflation is unstable. If the Fed leaves interest rates alone, any small inflation will get bigger and bigger over time. This is the conventional wisdom that until the Fed raises rates above existing inflation, inflation will keep getting worse and worse.
What if people are smarter than that? What if their expectations for next year are "rational," including all information, or at least "consistent," a model should write that the people in the model have the same expectations as those of the model, we economists are not so much smarter than everyone else.  Now we have the right hand group, and inflation dynamics are.
Next year's expected inflation = (number less than one) x this year's inflation plus (number) times interest rate
Now inflation is stable. Even if the Fed does nothing inflation will eventually -- accent on eventually, a lot may happen along the way -- come back down again.
Rational (or at least consistent) expectations, the idea that people think about the future when making decisions today, has been the cornerstone of macroeconomics since about 1972. It is part of the "new-Keynesian" tradition marked NK. There too, inflation is stable. The NK models can't tell you which of the dashed paths will happen, so they predict inflation will bat around between them. But they are all stable. Fiscal theory of the price level picks one of the dashed paths. Inflation is now stable and determinate.
Now you see the central economic question. Another way to put it, it's really about the sign of output in the Phillips curve. Does higher output, and lower real interest rates, cause inflation to grow, or to decline--to raise today's inflation above future inflation?
The Fed, and the markets, are taking the stability view, which the model produces by rational expectations. It's not completely crazy.
The Facts
What does history tell us about this momentous question? Well, that depends. 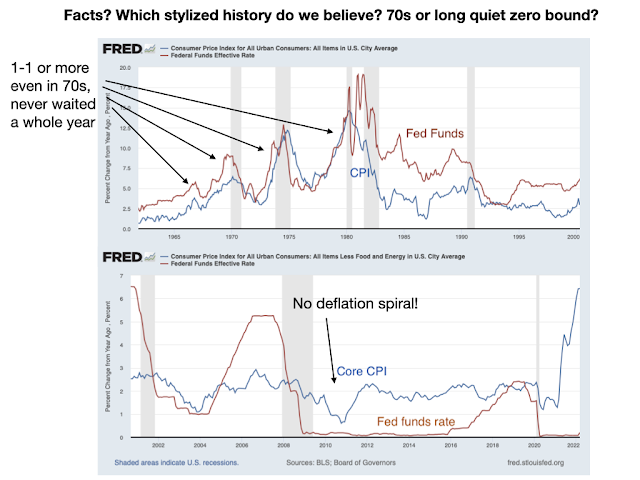 The conventional stylized history of inflation comes from the 1970s, top graph.  The Fed didn't do as bad a job as most people say. In each of the four waves of inflation, the did, promptly, raise interest rates at least one for one, and usually more so, with inflation. The Fed never waited a whole year to do anything. And yet it was not enough, with inflation steadily ramping up, until in 1980 the Fed finally put interest rates decidedly above inflation, and left them there for years, despite a bruising recession.
With that standard interpretation of history, and the adaptive unstable model in mind, the conventional view economists are exactly right to be screaming from the rooftops that the Fed needs to raise interest rates, now.
But now there is another history. In the zero bound era, bottom graph, deflation threatened. (I plot core cpi. Actual CPI got to 2% deflation.) The same unstable/spiral view said, here we go. The Fed can't lower interest rates anymore, so we'll have a deflation spiral. It never happened. Inflation was quieter at the zero bound than before when the Fed was moving interest rates around! 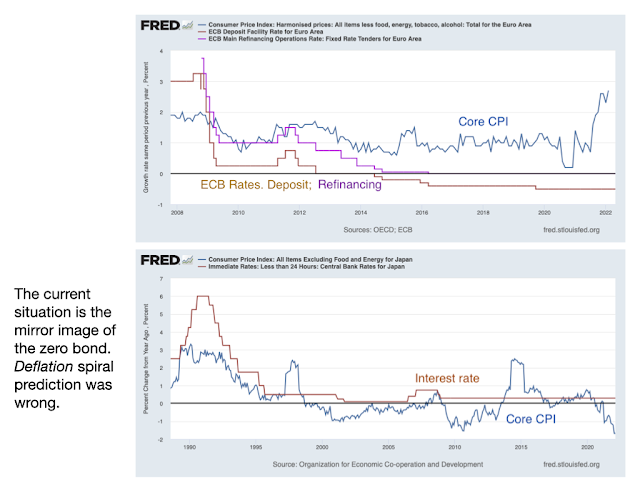 Europe's zero bound lasted longer, until now. And Japan's longer still, starting in the early 1990s. You can't ask for a clearer test that inflation can be stable (and quiet) while central banks do nothing with interest rates. In theory, that needs a lot of preconditions, in particular that no other "shocks" come along -- we just saw a big one, more are coming. But the "stable" theory at least has one episode to counter the standard story of the 1970s.
In short, ye who say inflation will spiral upward if the Fed does not raise interest rates to 10% or more tomorrow, did ye not also say that inflation would spiral downward at the zero bound?
It's not completely crazy.
A fuller simple model 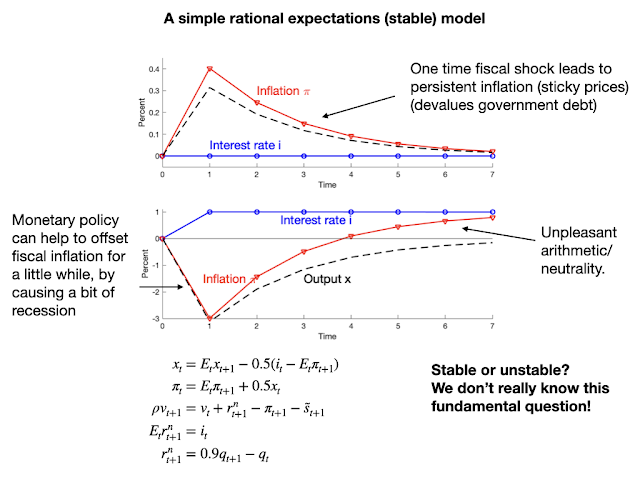 My last slide shows a simulation from a real but still very simple model. It has sticky prices, the full IS curve, rational expectations, and long-term debt. In the top panel, there is a 1% fiscal shock -- the government hands out 1% more debt and people do not think this will be repaid -- and the Fed does nothing. Again, in my view, we just did this times 30. The graph shows a lot of interesting things. First, a one-time fiscal shock leads to persistent inflation. Over several years of inflation higher than interest rates, inflation eats away at the value of government bonds. It does not lead to a one-time price level jump. We're living that period. But the inflation of a one-time fiscal shock eventually fades away on its own. (Don't take steadily declining inflation too seriously. It's pretty easy to spiff up the model to a hump-shaped response that rises smoothly for a while before turning around.)
Monetary policy is not helpless. What happens if the Fed raises rates, as it is starting to do, but there is no unexpected change in fiscal policy (i.e. continue to spend like drunken sailor, as before covid). In this simple model the Fed can lower inflation in the short run. Notice output fall. Yes, the Fed's tool is to cause a bit of recession (IS), and that pushes down inflation (Phillips). The Fed hopes to add just enough of the bottom curve on to the top curve to keep inflation somewhat moderated. But the Fed cannot eliminate inflation. Notice inflation goes up in the long run. The Fed bought lower initial inflation at the cost of prolonging the inflationary period. Eventually, in this model, inflation goes to wherever the Fed sets interest rates. I plotted interest rates that stay high forever so you can see how it works, but if the Fed eventually brings those rates down, so does inflation come down.
The ideal end to inflation would have the Fed do a little bit of this, and then Congress wakes up and gets fiscal policy in order -- passes the negative of the top graph.
Bottom line, both fiscal and monetary policy matter for inflation. Add the two graphs as you please to think about scenarios.
It's not so crazy.
Is this how the world works? I don't have pound fist on table certainty. I have spent so much of my life thinking the Fed has to raise interest rates promptly to avoid inflation, and so many economists think that's true, that fully digesting the rational expectations view is very hard. Yet theory, the Fed, markets, and the zero bound experience speak loudly.
In any case, if nothing terrible happens (these simulations assumptions no additional shocks), we will soon have another great test of macroeconomic theories, adding to the zero bound episode. Inflation will either fade away back down towards the Fed's interest rates, or inflation will continue to spiral upward until the Fed raises rates dramatically.
Yes, economics really doesn't fully know the answer to the most basic question, is inflation stable or unstable around an interest rate target, and does the Fed need to raise interest rates more than observed inflation to bring inflation under control. You now know as much as just about anyone.
The IS and Phillips curves (especially the latter) are awfully weak building blocks as well.